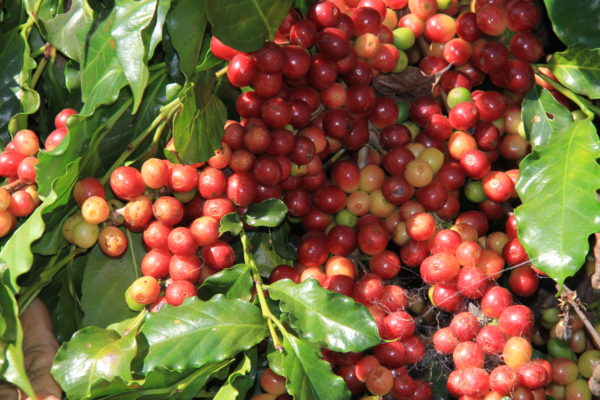 According to the International Coffee Organisation’s newly released December 2016 coffee report, an initial estimate of global coffee production in 2016-17 suggests that the world total will remain relatively stable – up 0.1% to 151.6 million bags – despite Arabica/Robusta divergence.

Arabica production is potentially set for a record level of 93.5 million bags with bumper crops expected from Brazil, Colombia and Honduras. Prospects for Robusta supply, on the other hand, are less positive, with lower crops expected from most major origins. Prices on the futures markets have reflected these developments recently, with Robusta prices generally showing support and Arabica under pressure, leading to a narrowing in the arbitrage between the two.

The daily price of the ICO composite indicator steadied slightly after its collapse in November, ending the month two cents lower than it started on 130.92 US cents/lb. The composite remained within a relatively narrow range, peaking at 135.04 cents and hitting a 4-month low of 127.62 cents. The Brazilian real also recovered after depreciating in November, but the possibility of a record crop in Brazil in 2016-17 put downward pressure on Arabica prices. Robusta prices, on the other hand, strengthened as heavy rains in Vietnam disrupted supply.

In terms of the group indicators, as previously mentioned, Arabica prices were lower in December, with Colombian Milds, Other Milds and Brazilian Naturals all down by around 12% compared to November, their lowest levels since May 2016. Robustas increased in daily terms over the course of the month, although their monthly average was slightly lower compared to November. As a result, the daily arbitrage between Arabica and Robusta, as recorded on the New York and London futures markets, narrowed considerably, reaching a 35-month low of 42.58 US cents/lb on 28 December.

The London-based ICO’s initial estimate of global coffee production in crop year 2016-17 comes to 151.6 million bags, mostly unchanged on 2015-16. However, this total volume comprises a significant increase in production of Arabica, up by 4.4% to 93.5 million bags (an extra 3.9 million bags compared to last year), which is mostly offset by a 6 percent decrease in Robusta (3.7 million bags lower).

Output from Brazil, the largest producer, is expected to recover strongly following two years of drought, with total production in 2016-17 currently estimated at 55 million bags. This recovery is expected in the Arabica crop, which is in the on-year of its biennial cycle. The Brazilian conilon (Robusta) crop remains affected by drought and is expected to be consumed by the domestic industry, leaving negligible export availability.

Production in Vietnam for 2015-16 has been revised up to 28.7 million bags following the receipt of new export data, which would represent a record crop. Prospects for 2016-17 are less positive, with drought at the beginning of calendar year 2016 likely affecting output, which is provisionally estimated down 11.3% to 25.5 million bags.

Colombia continues its ongoing recovery; after declining to 7.7 million bags in 2011-12 output has since increased every year and is estimated up 3.5% to 14.5 million bags. Production in the first quarter of 2016-17 (October to December) is already 5.4% higher than last year on 4.4 million bags.

Indonesia has also experienced adverse weather conditions for its 2016-17 crop, which is currently estimated down 18.8% on 10 million bags, although this could yet be revised depending on export volumes. Furthermore, the vibrant domestic consumption market will reduce export availability.

The ICO has also updated its consumption numbers, with final data now available for importing members in coffee year 2015-16 (October to September). This has resulted in a significant increase in the 2015-16 consumption figures, with higher than expected volumes from the European Union (up by nearly 600,000 bags compared to our previous estimate), USA (revised up by 841,000 bags) and Russian Federation (over 400,000 bags).

As a result, world consumption for 2015-16 has been revised up to 155.7 million bags (up 2.6% on 2014-15). This represents a significant deficit compared to production of 151.4 million bags. However, it is possible that some of this change can be attributed to increases in pipeline stocks which are not officially recorded, rather than actual consumption. It is therefore anticipated that consumption in 2016-17 may show a statistical decrease as these stocks are absorbed into the market, despite overall growth in the market. As always when considering world consumption figures, it is more valuable to look at the long-term trend than any year-to-year changes.